How software updates should work (Part 2)... 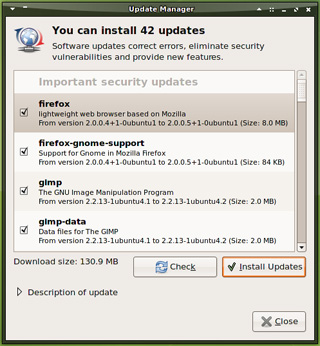 In yesterday's post, I mentioned Firefox as an example of an application that auto-updates itself in a simple and elegant manner, and highlighted some of the things that other software vendors could learn from Mozilla's example.

Today, let's look at one of my favorite aspects of modern Linux/BSD distributions - full system updates - and consider how Microsoft could potentially work with ISVs to build a similar mechanism for Windows in the future.

The screenshot on the right shows the Update Manager window from my Ubuntu setup. Notice how it offers to update Firefox and Gimp, both of which are "third-party" applications in the sense that they are not strictly parts of the operating system. In fact, any application that's installed from Ubuntu's vast software repository can be automatically updated in the same way. It's a wonderfully convenient system that ensures that everything on your computer stays up-to-date, down from the OS kernel all the way up to high-level applications like web browsers and image editors.

So how could something like this work on the Windows side? Here's my idea. Many of you have probably heard of the Windows Marketplace, a Microsoft site that showcases thousands of third-party Windows applications from big and small ISVs. Microsoft could launch a campaign to revamp the Marketplace into a true software repository with the help of prominent software partners. Incentive programs could be set up to encourage smaller ISVs to also get onboard.

Consumers would be able to install third-party software quickly and easily from this repository via a companion utility. Commercial applications would be available for purchase through the Digital Locker and would be installed using the same system. An update utility similar to Windows Update (with BITS support) would then ensure that all these applications are always kept up-to-date.

There's no doubt that implementing something like this would be a huge undertaking, and there are bound to be roadblocks along the way, but wouldn't the end-result be great?