After my previous post on the subject, I decided that I really needed to get some hands-on time with a few netbooks in order to make a decision. Because they're all so similar in terms of hardware configuration, it really comes down to the smaller details.

So I went downtown to the J&R store here in NYC to have a look. They seem to have the widest selection of netbooks on display, compared to other retailers like Best Buy, etc. For about 20 minutes, I tried out a few different ASUS Eee PCs, the MSI Wind, two HP Mini models, the Acer Aspire One, and a white Samsung NC10. They didn't have the Dell Mini and the Lenovo S10. The choice wasn't very difficult...

I immediately realized that I simply couldn't put up with anything smaller than a 10" display, and that narrowed down the selection considerably. Next, I knew I wanted all the battery life I could get -- after all, these things are meant to be on-the-go machines, so you don't want to worry about hunting for the nearest power source all the time. The Samsung NC10 ships with a 6-cell battery;  reviews indicated that it could easily pull off 6 - 7 hours with WiFi on, and the brightness turned down a bit. And because the 6-cell is standard on the NC10, it doesn't stick out like the "extended" batteries do on most other machines.

I liked what I saw of the NC10 -- the build quality was solid, the screen appeared bright and sharp without the awful glossy coating that seems all too common these days, the keyboard had a good size and feel, and it was tiny and light. But I wasn't quite sold on the toy-like white model that J&R had in stock.

So that night, I ordered a black one from Newegg, and it arrived the next day in a shockingly small box. My initial impressions were summarized in less than 140 characters, and that opinion hasn't changed since... :)

My last laptop was a Gateway M285-E Tablet PC that was given to me when I was a Microsoft Student Partner at UCLA a couple of years ago. It served me quite well during my last year at university, but after I moved to NYC, I found myself using the desktop far more often, while the laptop sat on the desk, collecting dust. So I decided to sell it sometime last year...

Recently, I've been thinking about getting a laptop again. I still don't foresee myself using it every day, but I'd like to have one to carry on trips, and something that I can occasionally use outdoors, or in the living room, etc. Plus, it's always handy to have a second machine to experiment with.

With that in mind, my requirements this time are a little different...

Since it's a secondary machine, I'm willing to settle for a small display and take a hit on performance. After all, the desktop's always around when I need two big screens and enough horsepower to run three operating systems simultaneously. :)

Looking back at that list, I realized something. I realized that this relatively new class of sub-notebooks that people are calling "netbooks" fits the bill almost perfectly. And with nearly every major computer company jumping on the bandwagon, there's certainly no shortage of choices!

So which one is it going to be? 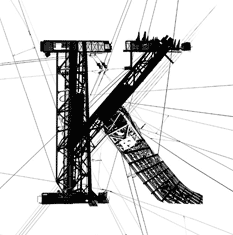 This is one of those incredibly creative ideas that you simply can't help but appreciate...

"Garamond Powerline" is something of an intricate experiment in typography -- a typeface composed entirely of images of electrical power lines. Each letter of the alphabet is beautifully crafted with its own unique personality.

Taken as a whole, the typeface is also surprisingly usable; scroll down to the bottom of the page to see the "quick brown fox" sample.

Kudos to the designer, Daniel, for this little gem!

So I've been receiving quite a bit of mail lately, asking whether Twessenger works with the latest Windows Live Messenger 2009 Beta. The short answer, unfortunately, is - no, it doesn't.

The latest Messenger beta build introduced a number of major changes, including what appears to be the removal of the "Shared Folders" feature and the official "add-ins" API. As you might imagine, Twessenger relied on this API in order to hook into the application.

I haven't had the time to dig deeper to figure out if there's anything I can do to work around this, but the odds of a fix coming anytime soon, if ever, are very low at this point. I'm going to steer away from attempting to use undocumented and unofficial methods because they're bound to break with any future Messenger updates, and I really don't have the time to provide support and write patches.

I'm sorry if this answer is a let-down for you. I hope that someone out there can provide a working solution that you can migrate over to soon. Thanks for all the feedback and kind words that many of you sent in during Twessenger's lifetime. It was fun while it lasted. :)